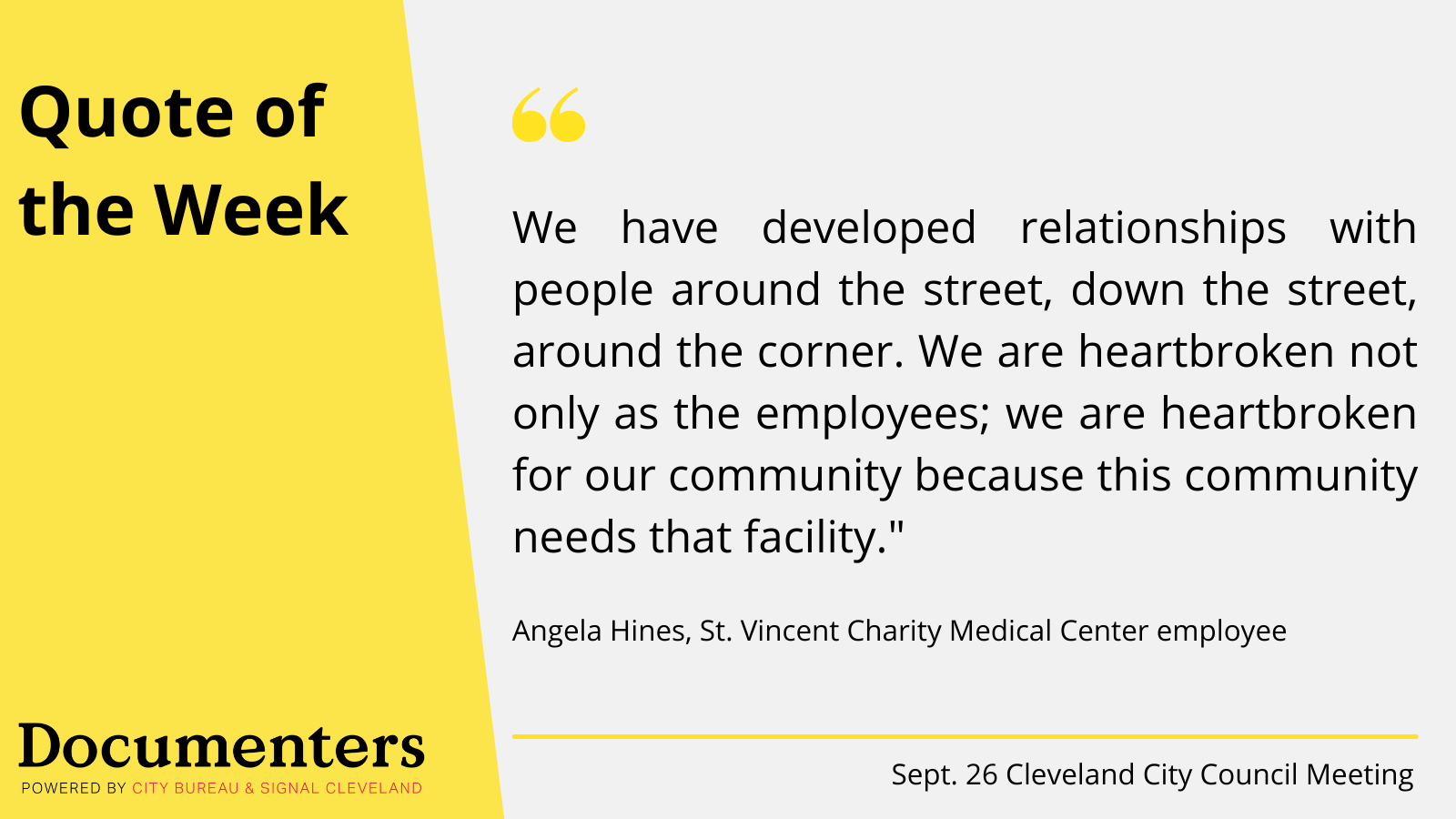 Angela Hines, an employee at St. Vincent Charity Medical Center, speaks about the impact of the hospital’s decision to end in-patient care (screenshot from video on YouTube).

What happened: Kareem Henton, of Black Lives Matter Cleveland, urged City Council to oppose the proposed construction of a county jail on an environmentally toxic site. The decision rests with Cuyahoga County Council, but City Council President Blaine Griffin serves on a committee that is set to meet and vote on the proposed site on Oct. 4.

Speaking on St. Vincent restructuring: Three community members focused on the impact of St. Vincent Charity Medical Center’s decision to stop offering in-patient care and to replace the emergency department with urgent care. Along with reducing services at Cleveland’s only downtown hospital, the changes could cost nearly 1,000 people their jobs. “We are disgruntled. We are hurt,” said employee Angela Hines. She said she and her co-workers did everything they were “supposed to do during this pandemic. My concern tonight is that this is heartbreaking to the community.”

What happened: Director of Public Health Dr. David Margolius painted a grim picture of the opioid crisis in Cleveland. Margolius presented legislation that would authorize the city to use $2.8 million of settlement money from an opioid-related lawsuit against pharmaceutical suppliers. Nearly 300 people died in Cleveland from opioids last year, he said, adding that in the last 30 days, 10 times as many people have died from opioids as from COVID-19. The money, which the city will receive in annual installments over the next 18 years, would be used to broaden access to naloxone, expand harm-reduction programs and fund recovery services.

Mow town: The committee advanced legislation that would pay for an initiative through December 2023 aimed at increasing the use of battery-powered lawn equipment among Cuyahoga County residents and businesses. Participants would be eligible to pick up $100 rebate cards from the city after providing proof that they scrapped a gasoline-powered lawnmower and purchased a battery-powered one. Electric battery-powered lawnmowers cost $100 to $400, according to Margolius.

Are you or someone you know struggling with opioid use? Learn more about available resources through Cuyahoga County’s Project DAWN (Deaths Avoided with Naloxone).

Interested in the Electric Lawnmower Rebate Program? Visit the city’s Division of Air Quality webpage for eligibility details, a list of participating scrap yards for discarding old equipment, and a sign-up form.

Resident Christine Stonebraker-Martinez addresses the committee about ShotSpotter (screenshot from video on YouTube).

What happened: The committee discussed — but did not vote on — a proposed expansion of ShotSpotter, a gunshot-detection technology that the city has piloted since November 2020 in a three-square-mile region that covers parts of Wards 1, 2, 4 and 6. Council members and Public Safety Officials, along with ShotSpotter representative Ron Teachman, debated the effectiveness of ShotSpotter.

Additional resources: Council Member Richard Starr, Ward 5, said he wants council to make sure the city is investing in other resources to help people who live in areas with high gun violence, adding that assessing the impact of other safety technology — such as surveillance cameras — is important, too. “We are dealing with people who have more access to a gun than a job, or they don’t want to work because they don’t feel like they have the tools necessary to work a job,” Starr said.

The committee is set to discuss the ShotSpotter legislation again Oct. 6 at 10 a.m. Interested in making a public comment? Attend the meeting at City Hall and let staff know before the meeting begins. You can also find Committee Chair Mike Polensek’s contact information — and that of all council members — on these flashcards.

Want an introduction to ShotSpotter? Check out our primer.

Sept. 28 – Cleveland Board of Control
Covered by Documenter Kellie Morris

What happened: The board approved a roughly $12 million contract with Dunlop & Johnston and subcontractors for building a new Fire Station 26 on Kinsman Road.

The “Cleveland Percent”: City officials discussed issues with Cleveland’s bid system, including reasons why some vendors may inflate their bids. Tyson Mitchell, Director of the Mayor’s Office of Equal Opportunity, said he has heard one reason vendors do that is because the city takes so long to pay them. James DeRosa, Director of the Mayor’s Office of Capital Projects, agreed, calling those bid hikes the “Cleveland Percent.” He added that there are other reasons beyond slow payment that may contribute to increased bids. The city’s new electronic payment system will facilitate faster payments, said Director of Finance Ahmed Abonamah.

Delayed payment from the city was one reason cited by local paint vendors who chose not to participate in the city’s Exterior Paint Program in 2020 and 2021. Learn more from this reporting by Rachel Dissell, Signal Cleveland’s Community and Special Projects Editor.

Wondering how board members are selected? Check out this Twitter thread from Paul Rochford, Signal Cleveland’s K-12 Education Reporter.

What happened: Council members discussed a variety of items, including the status of proposed allocations of American Rescue Plan Act (ARPA) funds and negotiations for direct flights to Dublin, Ireland, an agreement that was formally announced at Cleveland Hopkins International Airport on Sept. 28.

Civic Term of the Week: 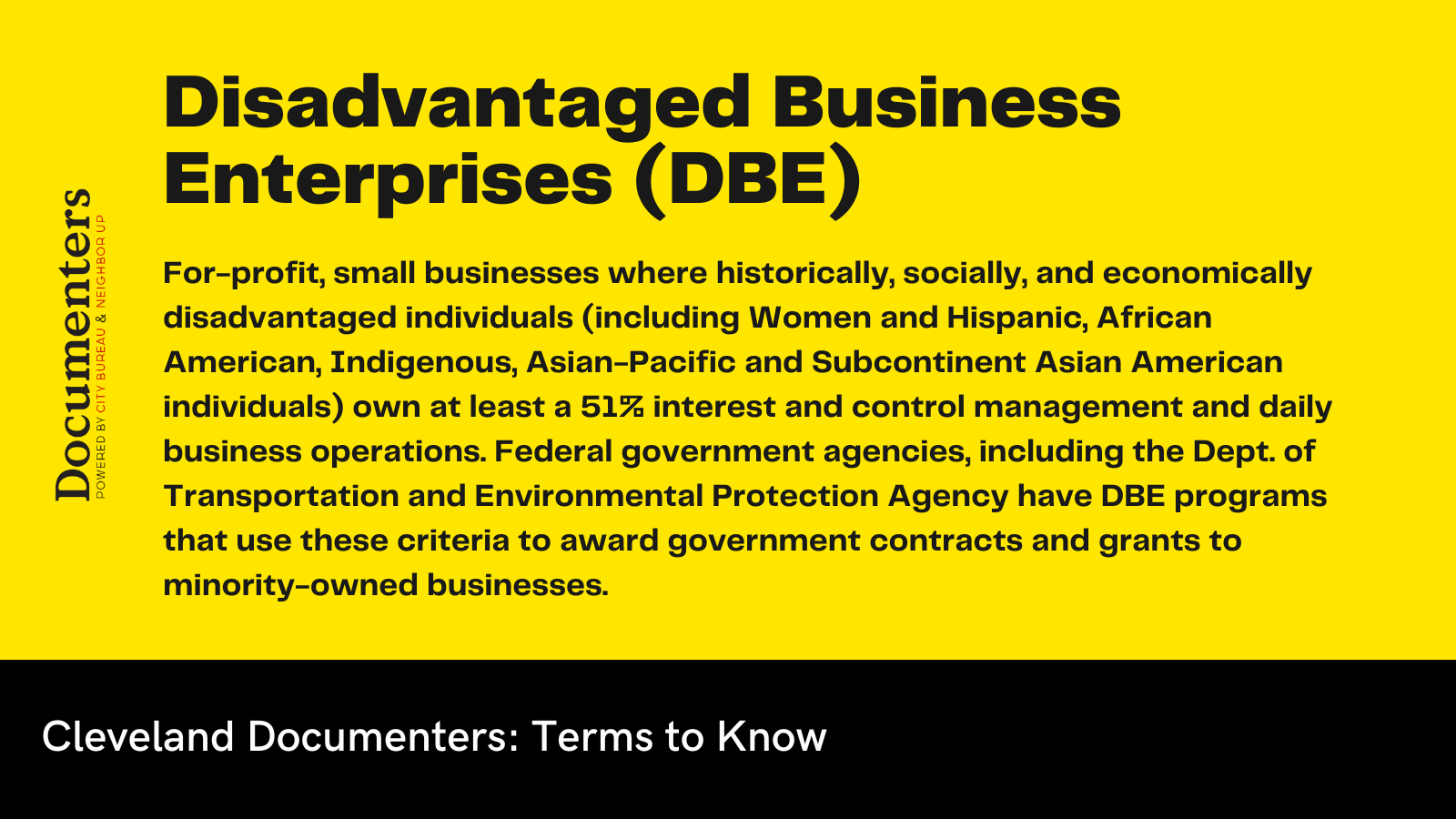 A look at the meetings Documenters are set to cover the week of Oct. 3.