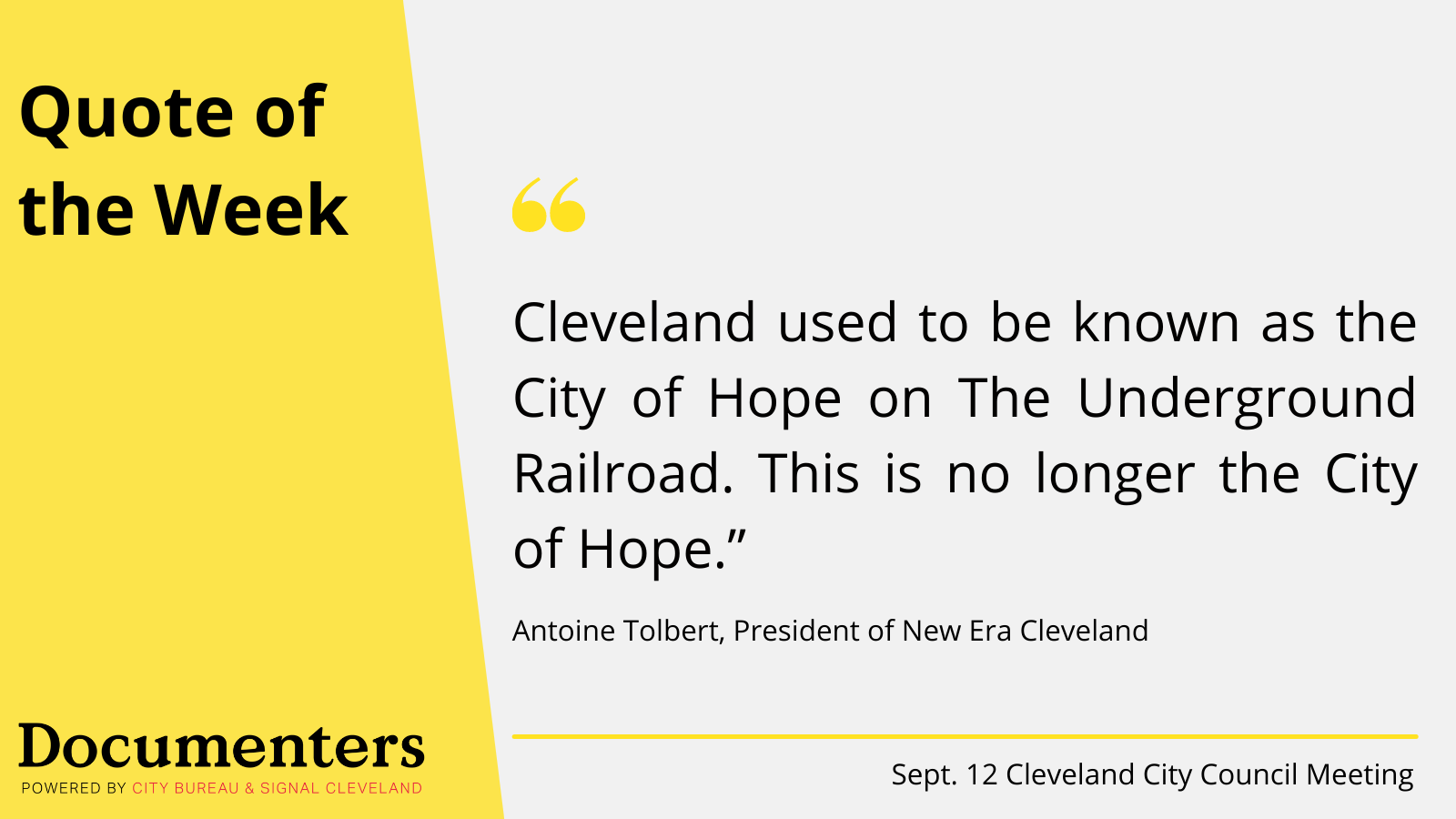 Yvette Hunt speaks to City Council about environmental concerns tied to construction in Ward 4 (screenshot from meeting video on YouTube).

What happened: In the first public-comment session addressing full council since June 6, community members spoke about wage theft and payroll fraud, environmental concerns about the construction of the Woodhill Station West housing development in Ward 4, citing property owners for lead-poisoning violations, animal trapping, the culture of policing, and legislation passed Aug. 10 that aims to strengthen tenants’ rights to defend against eviction for late rent.

A “City of Hope”: Antoine Tolbert spoke about the conditions residents are dealing with. He said people call his organization, New Era Cleveland, when they have run out of options, adding that food distribution and safety through community policing — with an emphasis on mental health — are a focus. “Cleveland used to be known as the City of Hope on the Underground Railroad,” Tolbert said. “This is no longer the City of Hope.”

And also: Council introduced more than 40 pieces of legislation, including one regarding a potential gift-card program for the purchase of electric lawn mowers. Council also introduced legislation for proposed allocations of ARPA funds; uses include cash incentives to get COVID-19 vaccines and expanding the use of ShotSpotter to detect gunfire in the city.

Where does Cleveland stand on ARPA allocation and spending? This council record, obtained by Documenter Jenna Thomas, summarizes where things stood heading into this meeting. You can also search more than 1,100 ARPA spending suggestions from community members using this database from Cleveland Documenters.

Sept. 14 – Cleveland Board of Control
Covered by Documenters Jenna Thomas and Marvetta Rutherford

What happened: The board approved two one-year contracts — with options for renewals — for home-repair services for Cleveland seniors through the Age Friendly Home Investment Program. The city expects the first years of each contract to cost a total of about $2.1 million.

Mayor misses the bus: Mayor Justin Bibb, in acknowledging the frequent public-transit use of Assistant Director of Law Jeff Marks, said becoming mayor has altered his commuting options. “I’m an avid lover of public transit. Unfortunately the police don’t allow me to take the bus as much as I want to these days.”

And also: The board approved valet services for a wedding at City Hall; the rotunda is available to rent for private events.

Interested in the Age Friendly Home Investment Program? Here is the program application. You can scan and email it to the department, fax it, mail it or deliver it in person.

The committee views a presentation by the Department of Public Safety on the city’s nuisance calls. (screenshot from meeting video on YouTube).

What happened: The committee advanced legislation that would support the implementation of dashboard cameras in 295 Cleveland police cars. The estimated cost of the project is about $2.3 million, and it would cover professional consultation, dash cam installation, cloud storage, licensing and software configuration for five years.

Ward 8 Council Member Mike Polensek, who chairs the committee, expressed frustration with alleged nuisance behaviors from residents who he said don’t respect their neighbors, and he said he wants to make their lives miserable “so that they either got to conform or they got to get out of our city.”

Ward 7 Council Member Stephanie Howse called for the Department of Public Safety to share data with the Department of Community Development to address some root-cause issues, such as home repairs. “…we want the police to come and do everything. The police department is not designed to do that,” Howse said. Howard told Howse that such collaboration does not currently happen.

And also: The committee advanced legislation that would authorize Accipiter Radar Corporation to sell data from the city’s boating radar system to third parties in exchange for maintenance of the system for a period of 10 years. There would be no additional cost to the city for the first three years, but it would cost about $18,000 per year for the final seven. The technology shows the last known location of boats on Lake Erie should they go missing, and it helps boats and vessels see where others are to avoid collisions, according to Public Safety officials.

Not familiar with City Council’s legislative process? Brush up with this guide from Cleveland Documenters’ Paul Rochford and Doug Breehl-Pitorak.

What happened: The board approved plans for Il Rione, a pizzeria near Gordon Square, to finish an outdoor patio and a staircase intended to improve access to basement storage. Il Rione originally sought relief from the zoning requirement to add 10 parking spaces as part of the addition, but the owners and project representatives informed the board that the restaurant would not use the outdoor space for seating or service, so additional parking spots were no longer required.

Nearby resident Audrey Malloy expressed concern about area residents having to compete for parking with visitors. “We don’t have parking. We keep hearing that the development corporation is going to solve this problem; we don’t have it,” Malloy said. “We’re parking on our lawns. The board needs to start poking the community development organization about accommodating visitors.”

Case postponed: The landlord of a Ward 8 rental property sought a variance to re-zone the home as a three-family dwelling rather than a two-family dwelling, but the board postponed the case. The owner and her attorney said there is a tenant living on the third floor who the owner said is currently in Housing Court regarding an eviction filing for not paying rent. However, the court cannot proceed with the eviction because the rental registration shows the house is zoned for use as a two-family dwelling; the owner said she did not know that when she leased the third floor.

Council Member Mike Polensek wrote a letter asking the board to deny the request because of the condition of the property and a neighboring one owned by the same person. The owner’s attorney, who said no violations had been cited on the property, said the owner has spent money on the eviction case that could have financed repairs and maintenance. The intention is for the owner to use the extra time to share plans for repair with Polensek and the local community development corporation.

And also: The board approved plans for a new two-story single-family residence in Ward 15.

Board votes against one East Cleveland recall election, leaves another set for Nov. 8

Board members discussed evidence provided by East Cleveland Council Member Korean Stevenson regarding the collection of signatures on a petition to have her removed from office (screenshot from video of the meeting on YouTube).

What happened: The board made no motion in response to arguments from East Cleveland Mayor Brandon King and Law Director Willa Hemmons regarding a petition to recall the mayor. They said the petition, which the board previously approved, is invalid because there were more than 200 words on the petition. Board Chair Jeff Hastings noted that the East Cleveland City Charter doesn’t limit the number of words allowed on a recall petition and that the board doesn’t have jurisdiction over what the charter says. The recall election is set for Nov. 8.

Separate recall election effort stalls: East Cleveland Council Member Korean Stevenson successfully challenged a petition for her recall election. The board reviewed documents provided by Stevenson that showed an individual who was previously convicted of a felony in federal court collected many of the signatures. A staff member said Ohio law restores the right to circulate petitions to people convicted of committing a state crime but not a federal one. The remaining valid signatures are below the number required to force a recall election in East Cleveland.

And also: The board acknowledged Secretary of State Frank LaRose’s decision that Rep. Shayla Davis cannot run as an independent candidate for Ohio House District 18 in the Nov. 8 election. The board had previously tied in a vote on the case.

Curious about board members and how they’re appointed? Check out this Twitter thread from Cleveland Documenters’ Paul Rochford for the answers.

What happened: The committee discussed the role of crisis intervention-team (CIT) coordinator, which is vacant following former Cleveland Division of Police (CDP) Deputy Chief Joellen O’Neill’s Sept. 9 retirement. The CIT coordinator serves as one of the tri-chairs of the committee, which advises on law enforcement’s response to individuals struggling with mental health issues.

Data delayed: Committee members expressed concern regarding the timely delivery of records and data, particularly regarding body camera footage related to CIT incidents and an assessment by the Cleveland Police Monitoring Team of potential racial bias in handcuffing.

And also: Larry Heller, of the Northern Ohio Recovery Association, recommended that a new subcommittee focused on homelessness be formed. MHRAC has three subcommittees that advise on training law enforcement, community engagement, and quality improvement of data.

Learn more about the monitoring team’s handcuffing data project from notes on a previous meeting by Documenter Juice McKenna. And, check out this 2018 CDP document that details the CIT program, as well as the CIT coordinator’s duties.

Civic Term of the Week: 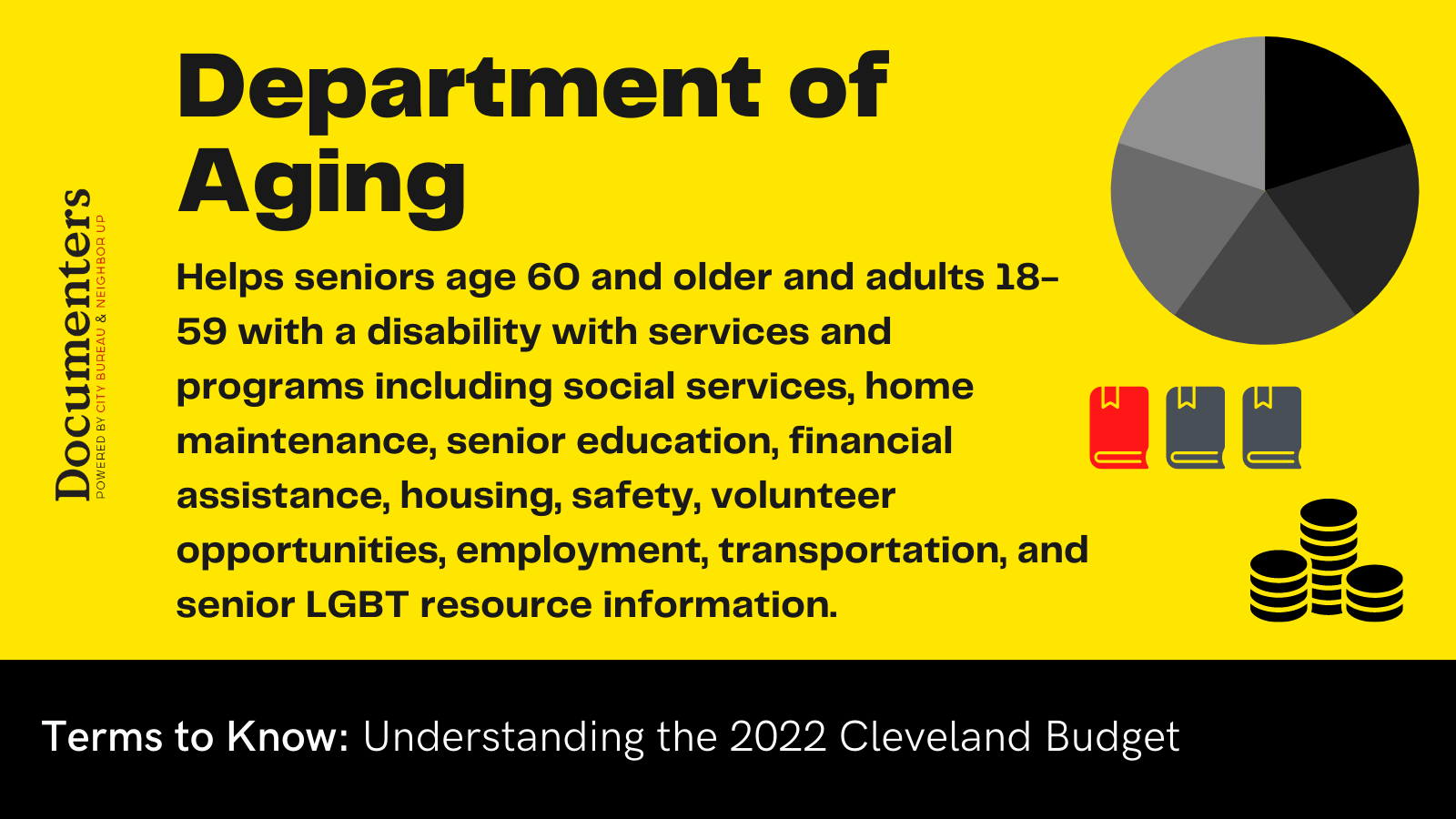 A look at the meetings Documenters are set to cover the week of Sept. 19.